This is another mid-week report on my progress rolling out the Karma Sense Eating Plan.

My neighborhood is one of the pockets currently inhabited by the Washington, DC metro area’s hipster community. Living among this crowd is one of the ways I avoid the spiral into geezer-dom. Not only do I refrain from shaking my fist and yelling at the kids on my lawn, I welcome them.

Recently, a piece of street/participatory/performance art appeared on our main drag. It’s called the courage wall. The picture I took of it yesterday is self-explanatory.

There is some weird stuff on there. We watched the framing of the wall go up for days. Then, on the worst day of my professional life, it was launched (it was a coincidence; not related to horribleness of the day). Within hours the wall went viral. It’s been covered in the national press and featured on The Today Show. I’ve seen other versions of the wall from all over the country appear on Facebook with sayings like “Before I die, I want too…”

Meanwhile, on the evening of the worst day of my professional life I had one of those middle-of-the-night jolts that became the Karma Sense concept. I started posting about the concept and the response was better than I expected. My website traffic went up, my Facebook page “Likes” went up 20% (without me having to beg for it). 10% of those new followers are people I don’t even know.  Twitter followers went up 30%.

Now, I’m not delusional  (about this). My website traffic and social media following was never anything to write home about (Dear Mom, My click-through rate is through the roof and my Klout score is raging…) And even with the increases, I’m still no Bebe Rebozo (and he doesn’t even have a website). But this is less than two weeks after I began posting the Karma Sense Eating Plan (KSEP). Plus the growth is all organic. Most importantly, there are now four of us that are following KSEP in our own way (which is the only way to follow it…your own way). Some of these people didn’t even require a gun to their head.

Apparently, the prospect of being healthier and happier while saving the world in the process was enough motivation. It seems a strategy that supports people’s desire to help others, get in touch with their heart, their mind, their body, and is supported by research, is more than just common sense. It’s Karma Sense.

And the acceptance of this concept by even just a few people has given me courage,…

And the Courage to Give Karma Sense

I’m a fairly prolific writer. Now some people, especially writers may object to my co-opting the word “writer.” They prefer I call myself a blogger. But, I have news for them. Bloggers think my communication skills are better suited for a monastery in which the residents take a vow of silence. Meanwhile, the person who sleeps next to me at night says I don’t do the silence thing well either.  And then, there’s always this:

So writer it is. And my plan for KSEP is indeed to consolidate what I’m putting together and make it available in a long continuous format (sometimes called a book) that has value added features such as “editing”.

I’ve also been approached by a few people who encourage my exploration of other media. One was a clear attempt to separate me from my money. Another is worth considering based on who is recommending it and out-of-pocket expense. This is sticking in the back of my mind. But no plans for the immediate future.

Finally, I am working on a very short form version of KSEP that I can readily distribute at health fairs, in coffee shops, and on the street, but perhaps without the benefit of my Elmo costume since that didn’t work out so well last time. 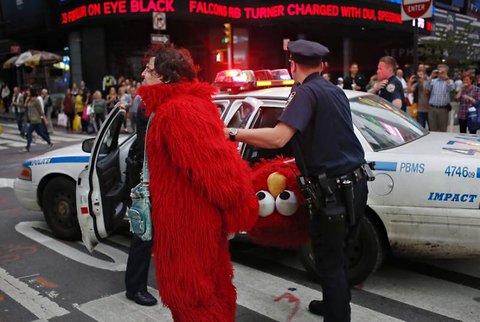 But in all sincerity, I believe that linking people’s good deeds to their good health is a worthy concept. The Karma Sense Eating Plan is an implementation of this concept. And some form of this concept should become sticky. That’s what I aim to do.

Minor Tweaks to the Plan’s Terminology

The next installment in the Karma Sense Eating Plan is the second and final examination of the Sense component. The first part focused on the theory of driving positive change in your health habits. The upcoming post gets closer to how the theory applies in KSEP and how KSEP connects your good deeds to specific and personal positive change. That post should be out by this weekend. But to foreshadow, I’m resisting the slide into geezer-dom.

1. All one-on-one coaching services are available either face-to-face or through telephone/internet.
2. Pricing does not include travel expenses.
3. Discounts available based on financial need thanks to generous grants by private donors. Contact us to qualify.